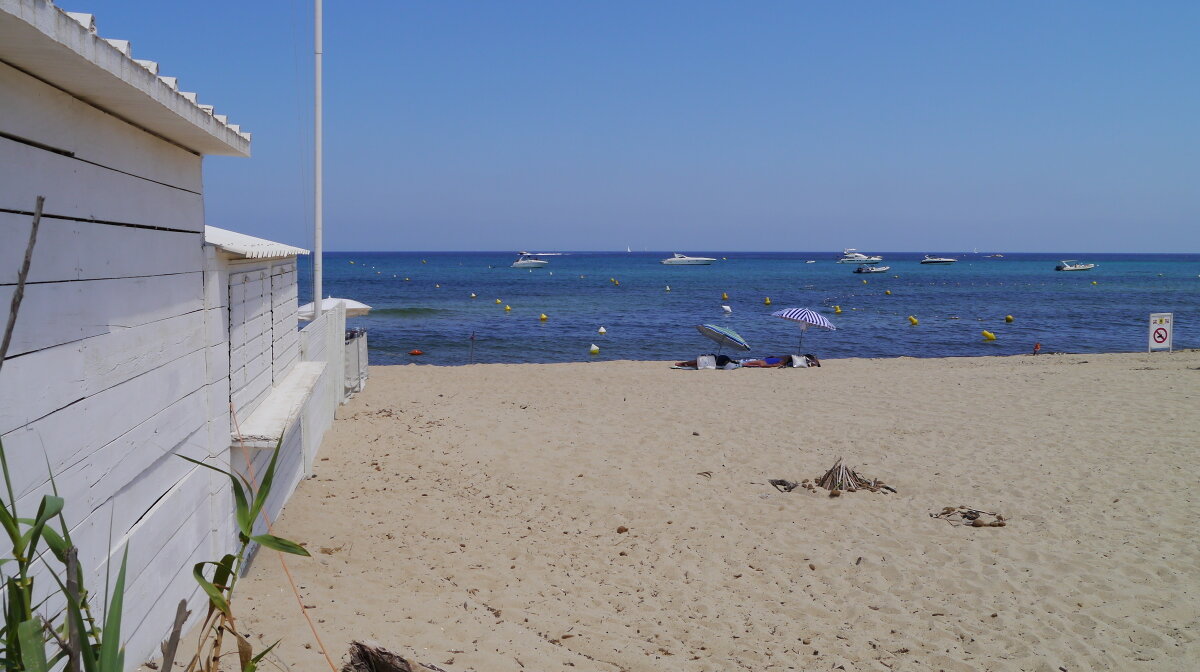 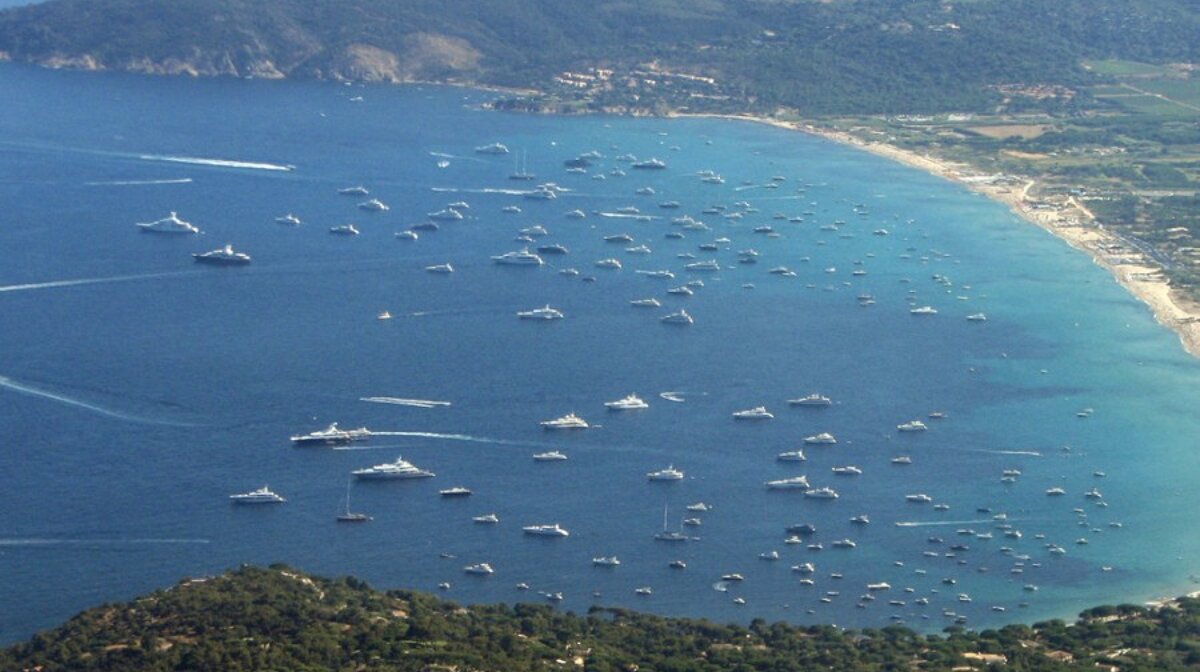 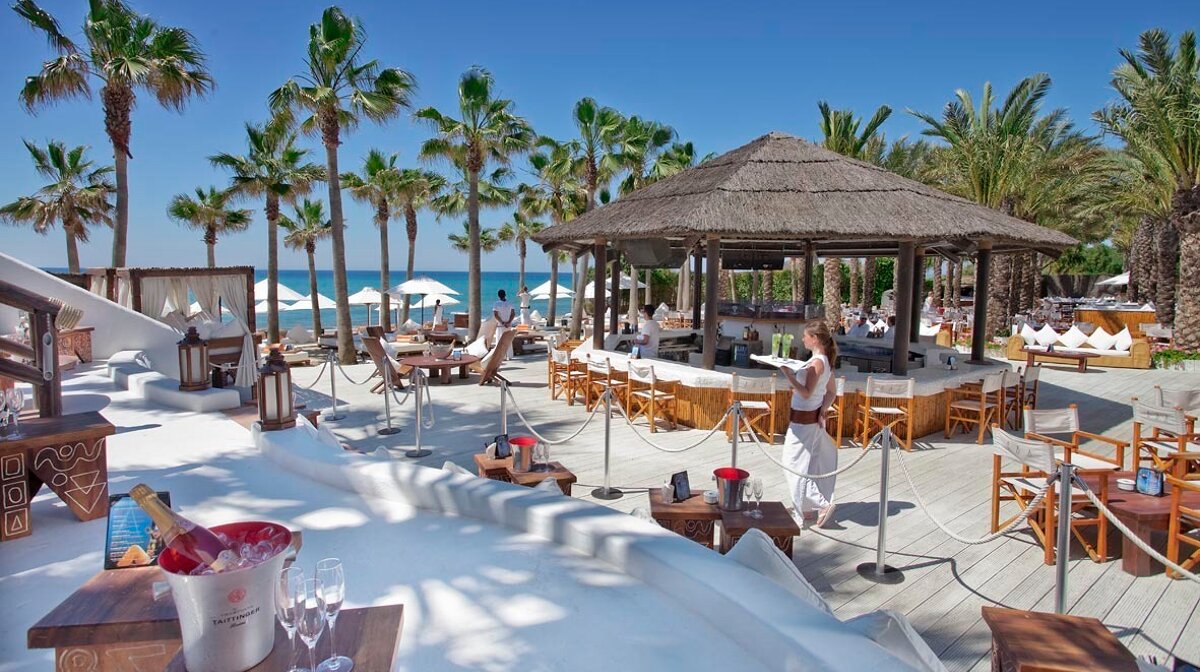 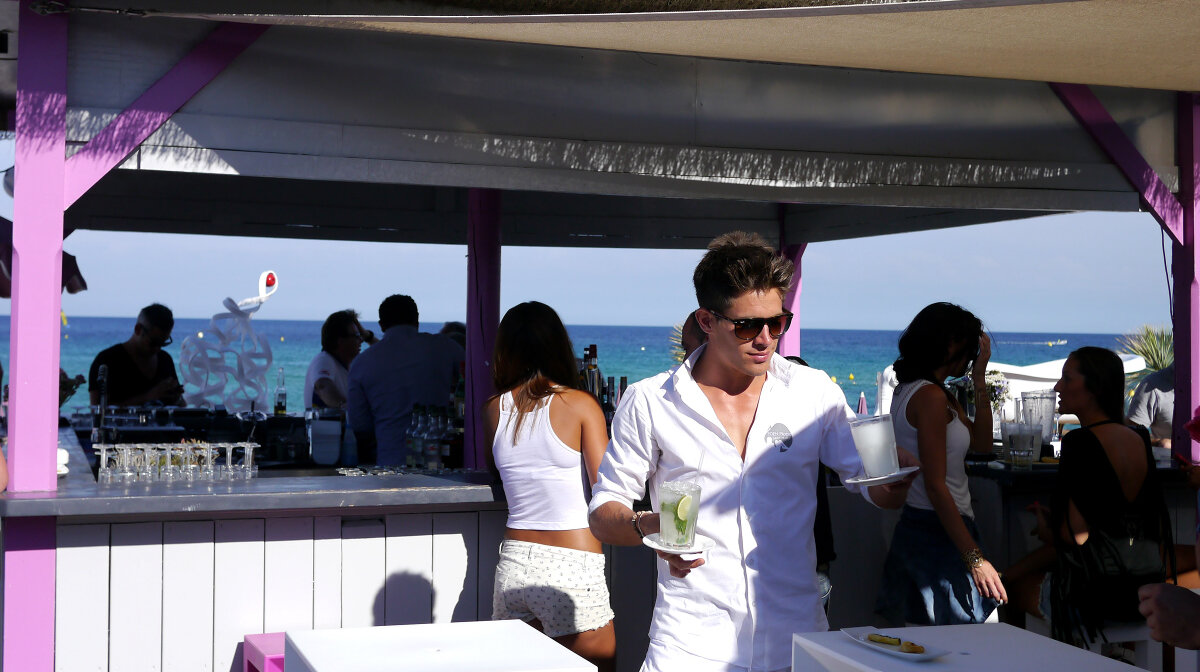 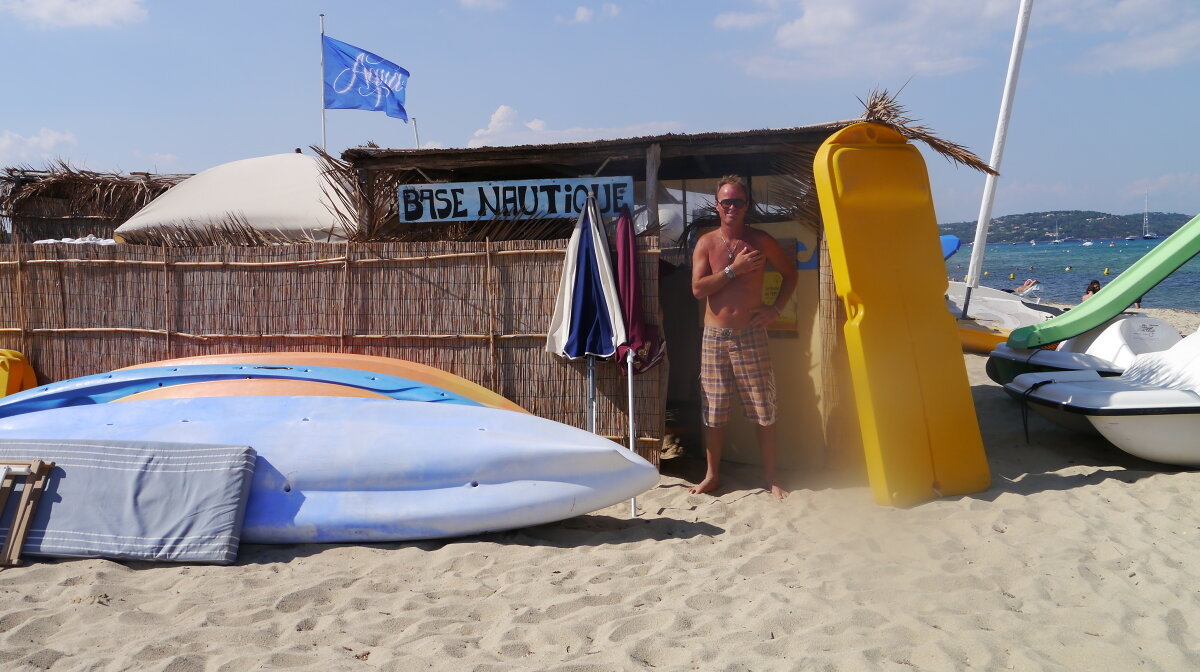 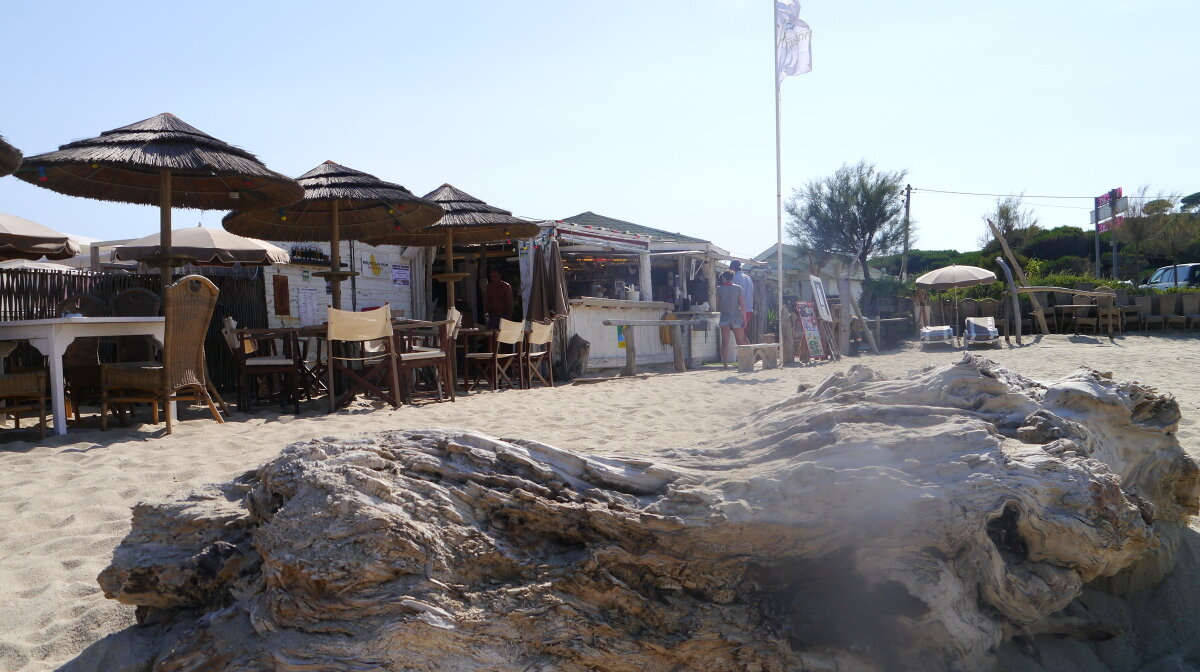 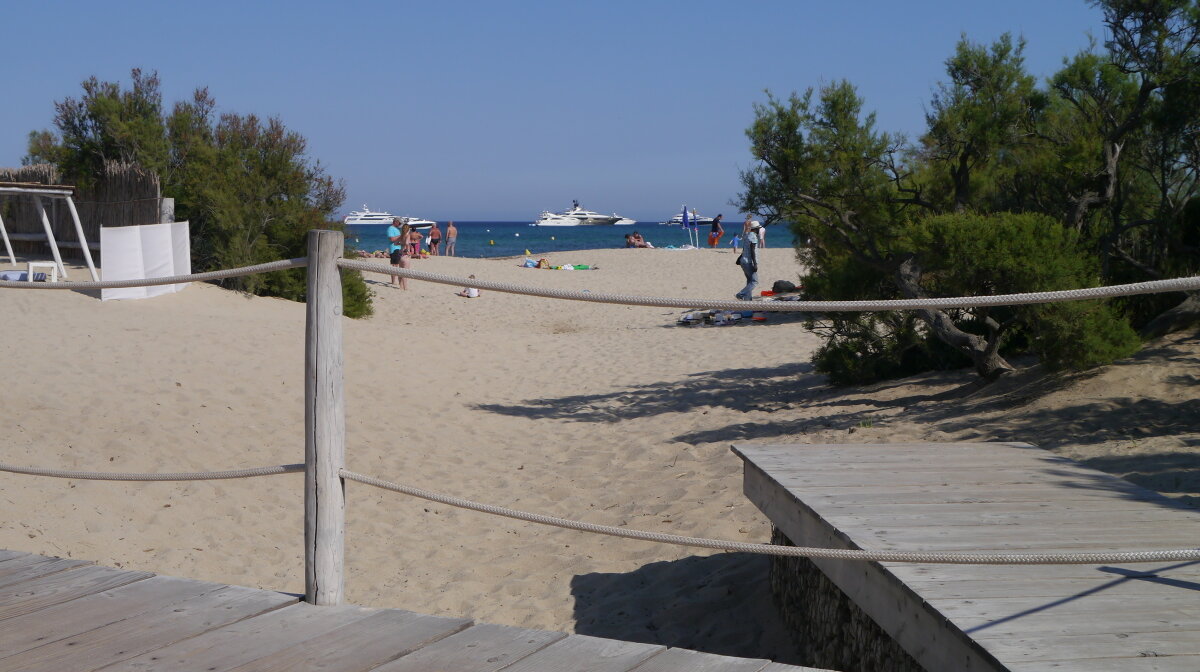 Pampelonne Beach is the beach most people associate with Saint Tropez. This is where you will find the A-listers, the famous beach clubs, and the super yachts resting in the bay.

It is the busiest and longest beach in Saint Tropez, set in a beautiful sheltered bay. It stretches over 5km in length, with white sands and sparkling turquoise seas. The beach is spilt between public areas where you can lay down your towel and belongings, to a range of beach clubs where  you can hire sun loungers & parasols, and dine with some extravagance.

In reality this beach belongs to the closest village of Ramatuelle rather than to Saint Tropez itself, which is around six kilometres away. During the summer months of July and August, the beach can become busy and crowded. Your beach towel may overlap that of your neighbour's but if you are prepared to walk, you should be able to find a more spacious plot.

If you prefer your beach time to be a bit more tranquil then consider visiting in low season, towards the end of September when the sun is still warming every inch of body and soul, when the beach chairs are half occupied, and you can enjoy this long white sandy beach at its best.

Facilities are excellent, with public toilets, showers and three first aid stations with life guards on duty from mid-June to mid-September.

A bus service runs from central Saint Tropez (St Tropez to Ramatuelle), it takes 15 minutes. Parking (a 4€ to 5€ fee) is available in one of the six access points. A taxi from the town centre to Pampelonne will cost about 30€.

This is where you will find some of the south of France's most infamous beach clubs. The celebrity haunts of Club 55 and Nikki Beach are popular with locals, tourists and the A-listers. You can hire a sun lounger and parasol on the beach, or dine in the restaurant, there is no pressure to do both. Some of the beach clubs are set back from the beach and have a pool for guests to enjoy, although the sea is never far away.

Remember to book your sun lounger in advance during July & August. The more famous the club, the more expensive the sun lounger hire. Lunch & dinner reservations are also recommended during the summer period.

Club 55 is the most famous beach club on Pampelonne Beach. It was used in a scene of the famous Bridgette Bardot film ‘And then God Created Woman’, and it has been wildly popular with the jet set ever since. Despite it's rustic simplicity, it is quite splendidly expensive, and the food isn’t that much chop compared to what you can get elsewhere, but none of the A-listers who come here seem to really care. It's a real experience and one your should give some serious thought to!

Along this stretch there’s also Moorea Beach Club, which offers a more relaxed vibe, while Le Jumeaux has a kid’s playground and is open year-round. Thai food and massages are on offer at La Cabane Bambou, while the Aqua Club offers good food in a laid back atmosphere often missing in glammed-up Saint Tropez.

Nikki Beach is for those who want to be part of the glamour and glitz of life on the Cote d’Azur. It’s achingly stylish, with the requisite plush daybeds and pool, but it also loves a party, with big-name DJ’s spinning chilled day beats and dance music throughout the summer months.

All in all, there are a great many beach clubs to choose from. At least for now. A French law that prohibits commercial buildings on public beaches threatens the future of these glamorous French institutions. Many clubs along the Riviera are being served demolition notices for when their leases run out, and nobody really knows what the future holds. So find that deckchair, order your magnum of rose and lie back, for the experience is set to get more rare, and inevitably more expensive, in the future.

The sea and surf are more than inviting, and the lure of tripping over the outstretched feet a famous person is irresistible. There are lifeguards on duty all along this long stretch of sand. During the busy summer months the water can become rather crowded as yachts moor off the coast and ferry in their guests to the prestigious beach clubs for lunch.

This beautiful long stretch of sand, is meticulously cleaned in the high season by the plagistes, those who work for the beach bars.

There are watersports aplenty to enjoy on Pampelonne. Jet skiing, windsurfing, paddle boarding are all available at kiosks dotted all the way along the beach.