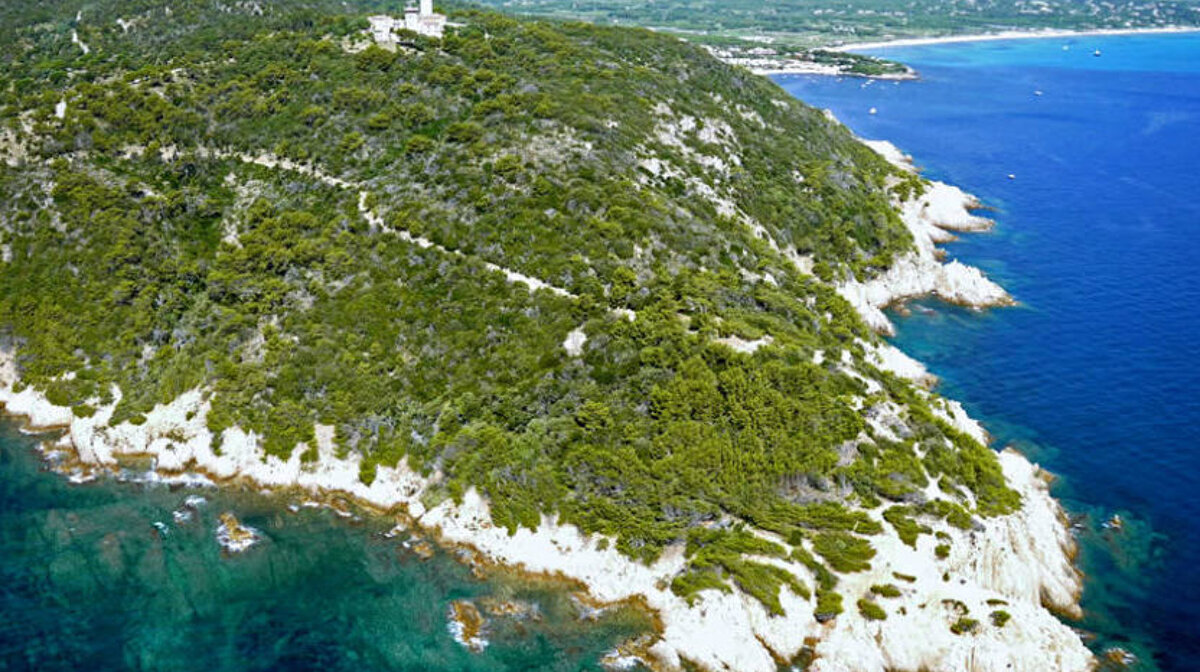 Covered by a dense forest of pine and oak trees clinging to the rough granite rocks sculpted by the elements, the tip of the cap supports one of the tallest lighthouses in France relative to sea level (129.80 m).

This wonderful area of natural and rugged landscape offers wonderful panoramic views of the bay of Pampelonne. The wildest of 3 caps, it is served only by a single track. Its coastal path is less travelled than the other two caps and the forest, consisting mainly of cork oaks and an undergrowth of shrubs, is significantly more dense.

Wildlife
A variety of wildlife can be seen in this are, specifically reptiles such as lizards, snakes and the popular Hermann tortoise (the only native tortoise of France. The population is located in the department of Var, and they are an endangered and protected species). You may also be lucky enough to see the beautiful peregrine falcon or the majestic Northern Gannet, if you look to the skies.

The flora
Since the 2006 fire, the forest is mainly composed of cork oak trees and undergrowth of shrubs such as Arbutus, several stages of evolution. The flower of Arbutus can be seen in the autumn with the white bell shaped bloom. On the coastal edge, meanwhile, you may find stands of Jupiter and Isoetes Durieu, two remarkable plant species that are protected at national level.

The Lighthouse
Located on Cape Camarat, it is in fact the second tallest lighthouse in France, its source light being located at 129.80 meters above sea level. Commissioned in 1831, electrified in 1946 and automated in 1977, it is remote-controlled from the beacon of Porquerolles.

The area has been classified under the 1930 Act landscapes since 1995, and is looked after by the Conservatory of Natural Spaces of the Region Provence-Alpes-Côte d'Azur (PACA CEN). Their remit includes; fighting against fire risks (monitoring, restoration of land burned), landscape rehabilitation of the site (removal of utility poles, demolition of a blockhouse and a shed without aesthetic or historical interest etc.) and public awareness (site closure to motorised vehicles and camping etc.).

There is a car park where the road ends. Use of motorised vehicles is prohibited on the Cap. Camping is also prohibited.