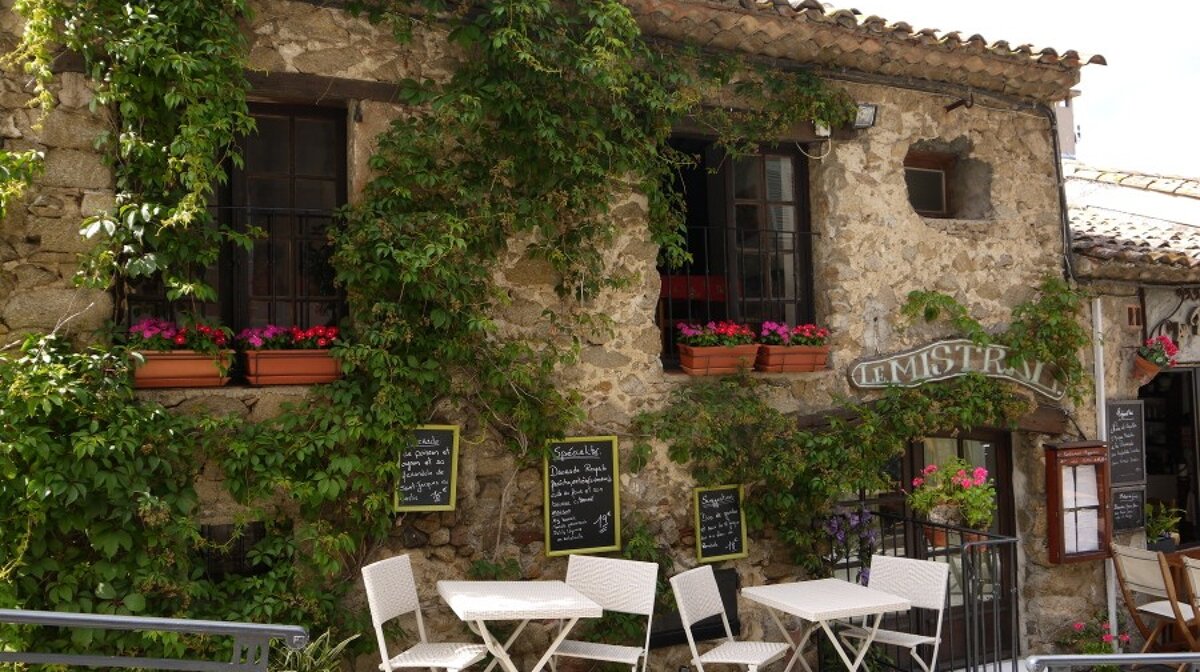 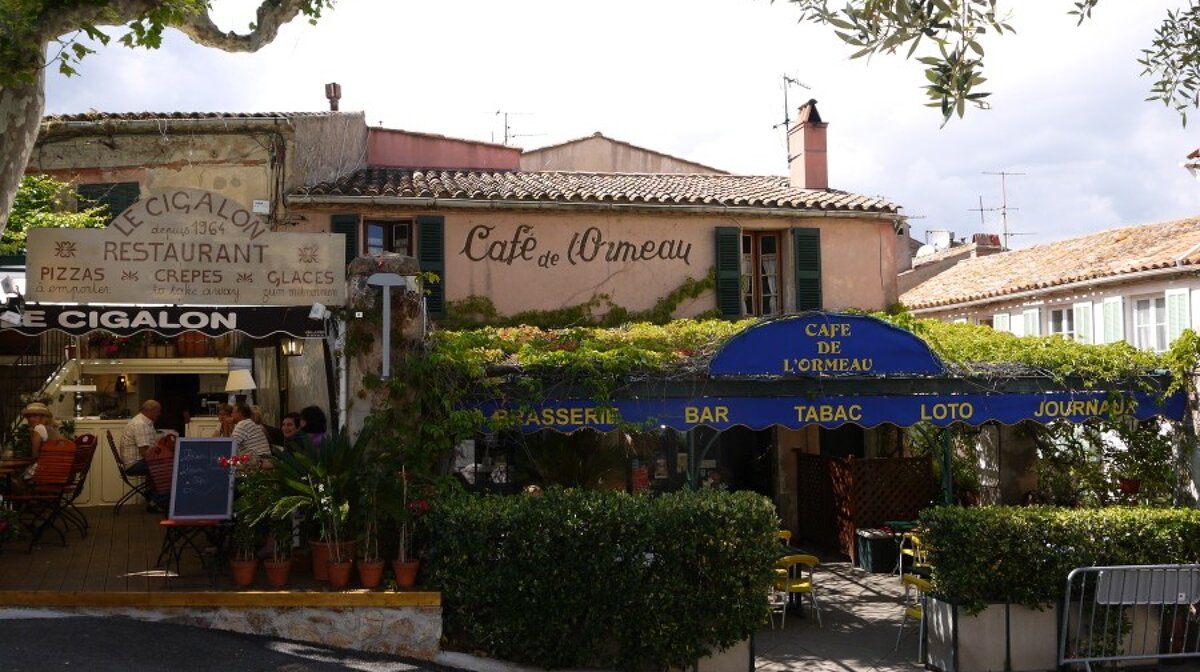 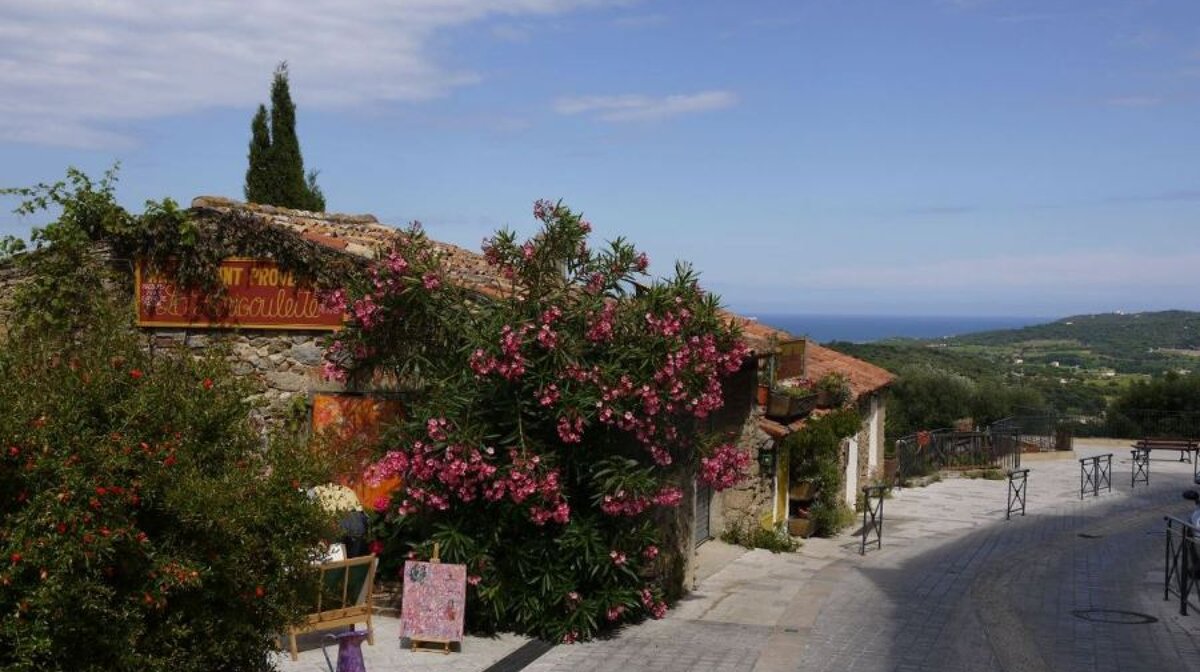 A village clinging to a hill side, visible from afar, a cluster of houses grouped in a dense fortification. That's a village perché, a striking feature of the Provence landscape. Close to the Mediterranean sea, on the peninsula of St. Tropez, you find two such villages: Ramatuelle and Gassin.

You visit Ramatuelle, not because it's more charming than its neighbour Gassin, but because it also encompasses France's most famous beach, Pampelonne. That stretch of five kilometres where the jet set, and those who want to be close to them, tan, swim, cavort, lunch, disco and what-not, in a happy ambience of sun and fun.

Built on a hillside five kilometres from the famous Pampelonne Beach, Ramatuelle is a small village (2000 residents) that offers fabulous views overlooking the Gulf of Saint Tropez. This exceedingly pretty town has gorgeous narrow streets lined with coloured shutters and vibrant pink bourganvillea trees- and lots of cafes, boutiques and artisan galleries to while away the hours.

In the 1950's it began to attract actors and artists, who settled in one of the narrow houses, or visited in the season.  Many celebrities since then have fallen in love with the place and settled there, and quite a few tourists have too. Today, its summer is filled with performances in the amphitheatre: its Theatre Festival in July or, in August, its famous Festival du Jazz, when artists from around the world perform during the four-day festival. We were there many years ago when Dee Dee Bridgewater gave a sparkling performance. It was the last night of the festival and after the final encore, the visitors began to throw their seat cushions (thin and light!) onto the stage, not to show their disapproval, but just because it had become customary to end the jazz festival that way. The drummer in Dee Dee's band had not been informed of this custom and in anger started to throw the cushions back. Confusion and hilarity on both sides; a true cushion fight ensued. In the end, the drummer suffered slight damage to his front teeth and the custom was banned once and for all from the Jazz Festival in Ramatuelle.

If you are seeking peace, tranquillity and a heavenly beach holiday, the village is ideal. It is around 10 kilometres to the south west of Saint Tropez.

Its history stretches back to at least the early Middle Ages. It is believed that its name comes from the Arab word Rahmatu'llah, which means divine providence. This links the village to the 8th and 9th century when the Saracens, with particular providence,  terrorised the region.

In the 16th century the village was destroyed during the France's religious wars, and rebuilt in the early 1600's. Today, when you walk through Ramatuelle, you will easily get lost in its maze of narrow streets, steep short-cuts, and gentle dead-ends. It's as if  this Provence village, after all its history, wants to confuse the visitor, friendly or not.

There are several buildings of note in Ramatuelle, although much of the enjoyment of the town is to be found just walking through its narrow streets.The Church of Notre Dame is a 16th century church built up against the thick city walls, its belltower was also used to keep lookout for approaching danger. Also of interest is a tiny, Arabian-style prison built by Napoleon the Third, and the old gates built into the walls. You will also appreciate wandering round the authentic while having a look at different little galleries.

Pampelonne beach offers five kilometres of fine white sand, including long stretches of public beach as well as an abundance of glamorous beach clubs. There are also two nudist beaches and several places to hire watersports equipment, and there's some excellent diving to be had just off the coast.This is one of the most famous beaches on earth, great for celebrity spotting, watching the immense superyachts or just lying back with a cocktail.

In the summer months the village of Ramatuelle hosts a world-famous jazz festival, where many big names have performed.

Things to Do in Ramatuelle

Take a drive to Cap Camarat and visit the second biggest lighthouse in France, you can also join a lovely coastal walking path to l'Escalet. There are also some great hiking trails around Massif de Maures. Afterwards, quench your thirst and sample some wine at a local vineyard. Or you can head down to nearby Pampelonne Beach to mix with the jetset in the beach clubs and restaurants and watch the yachts sail past.

For Michelin star gastronomy, head to the one-starred La Voile restaurant, for modern, refined food. For something more traditional, the Saveurs Sinceres and L'Ecurie du Castellas both serve great Mediterranean cuisine with fresh Provencal produce. Of course, the many beach restaurants at Pampelonne Beach also await you, and nearby Gassin and Saint Tropez both have some truly excellent restaurants.

Where to Eat in Saint-Tropez

Ramatuelle comes alive in the summer months with music festivals and buskers plying the tourist trade. But if you want the nightclubs and dancing until dawn, then head down to glittering, glamorous Saint Tropez.

Ramatuelle is renowned for its luxurious hotels and villas offering magnificent views down on to the Mediterranean. Most of them are located outside the village, offering privacy and wonderful sea views. La Reserve, just to the south of Ramatuelle, is one of the most exclusive.

At a lower price range you could stay in charming guesthouses that offer romantic and rustic stays in beautiful surroundings.

There is a camping site towards the southern end of Pampelonne beach, and some more on the way towards Cavalaire sur Mer.