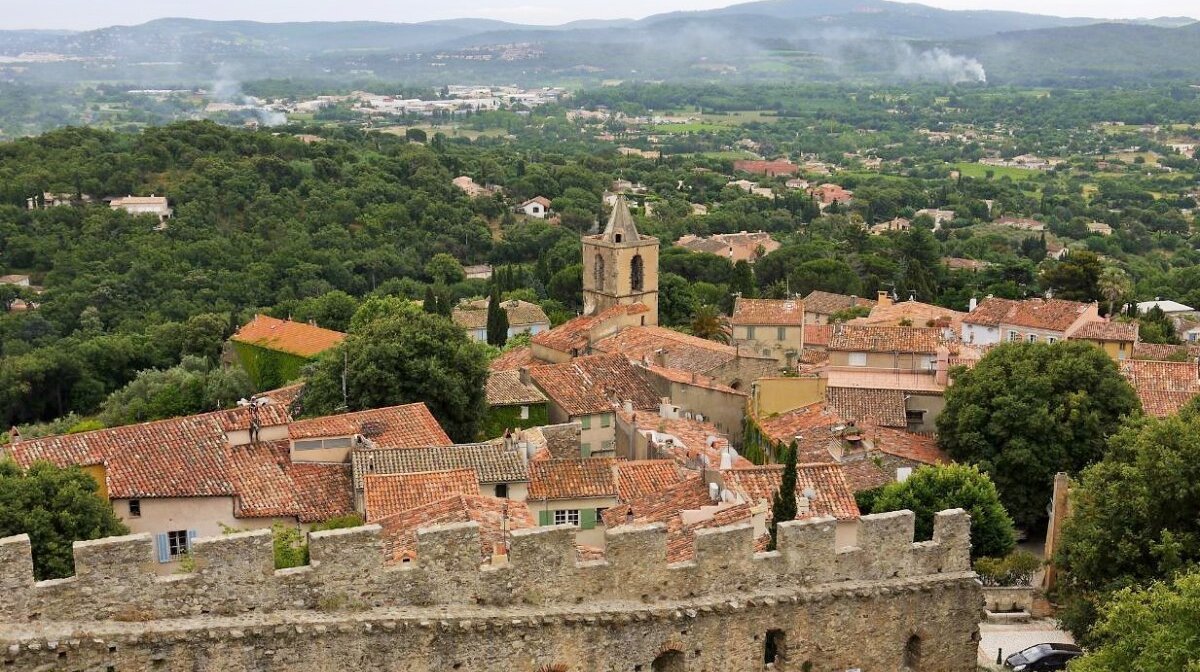 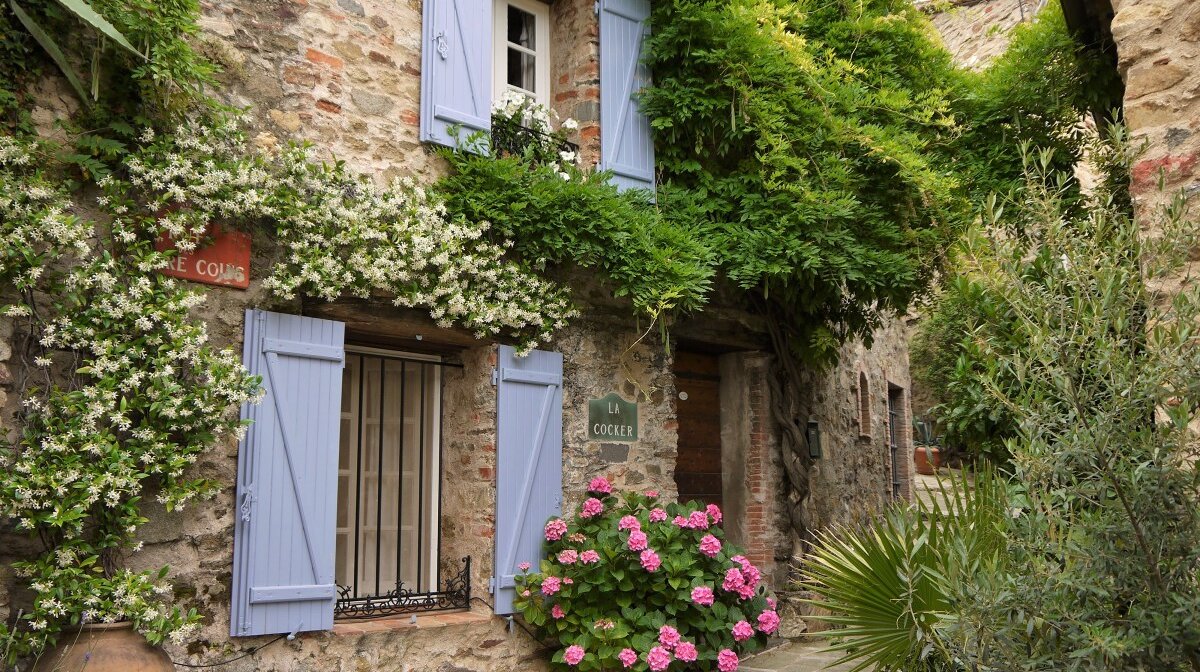 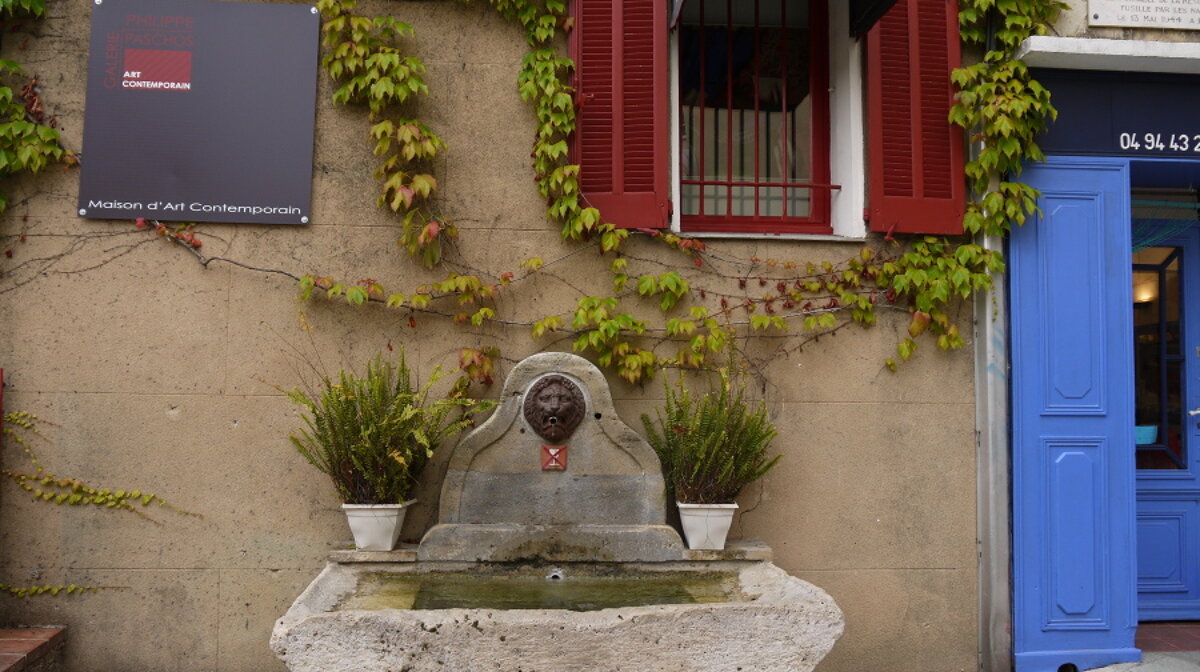 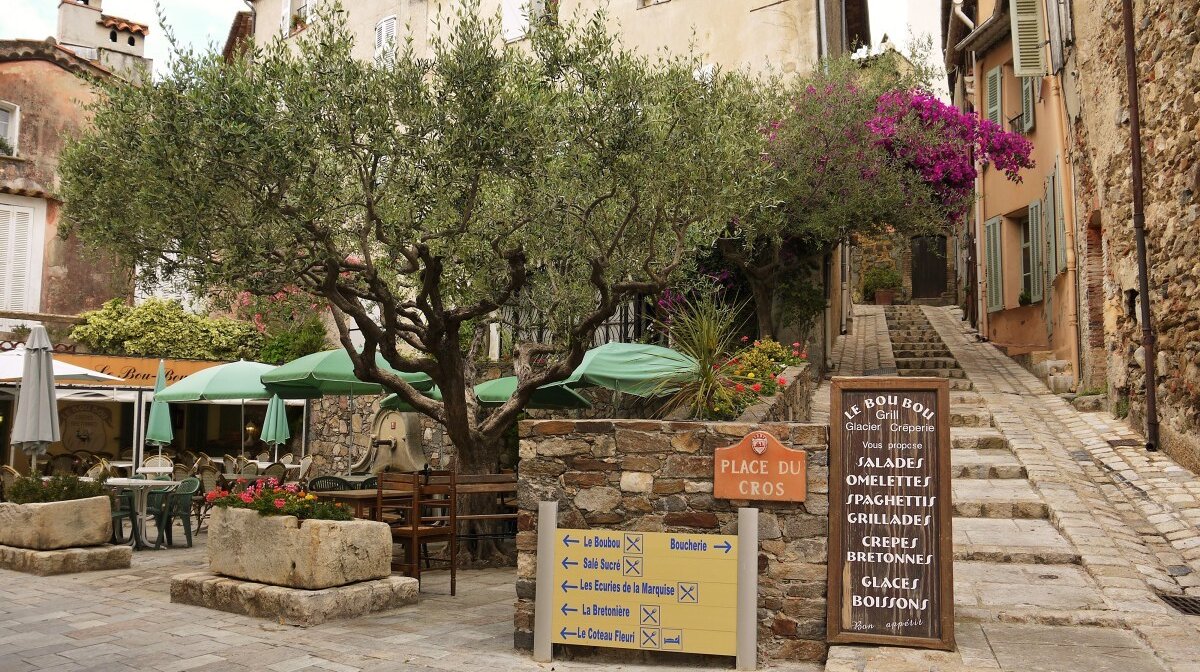 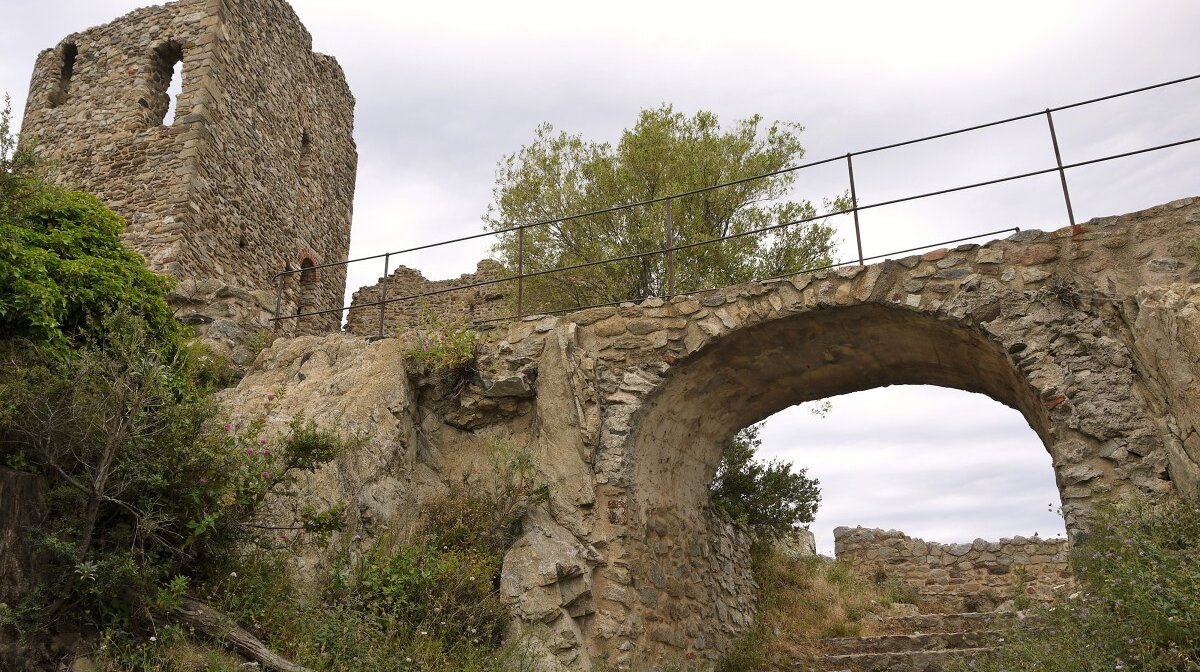 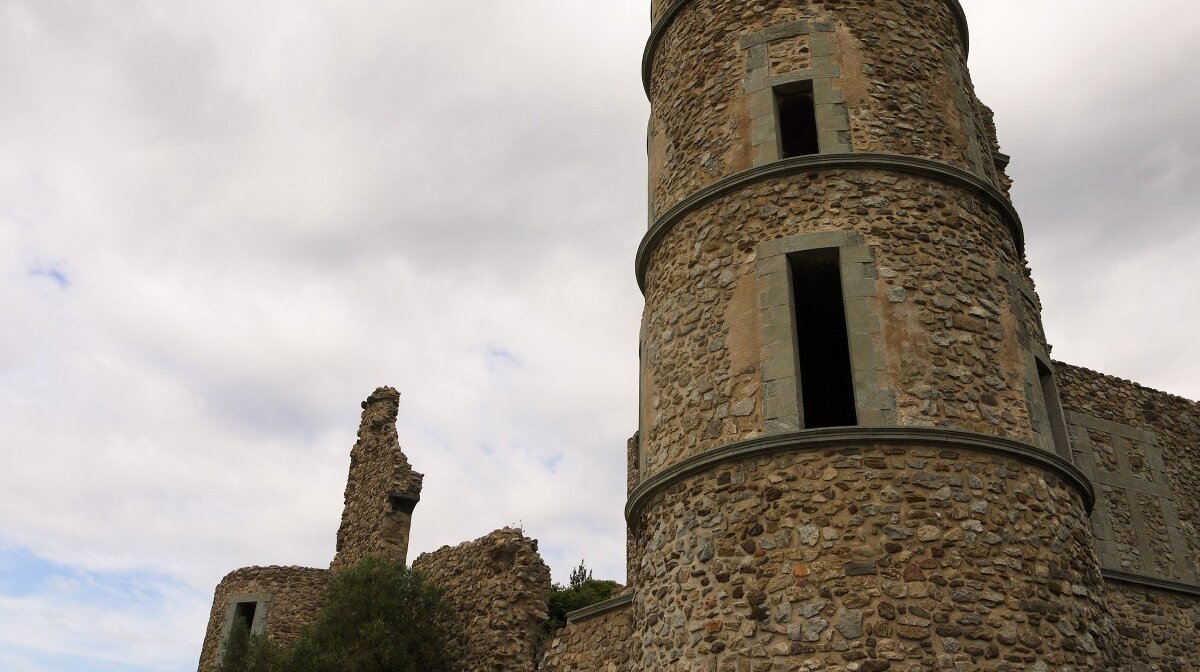 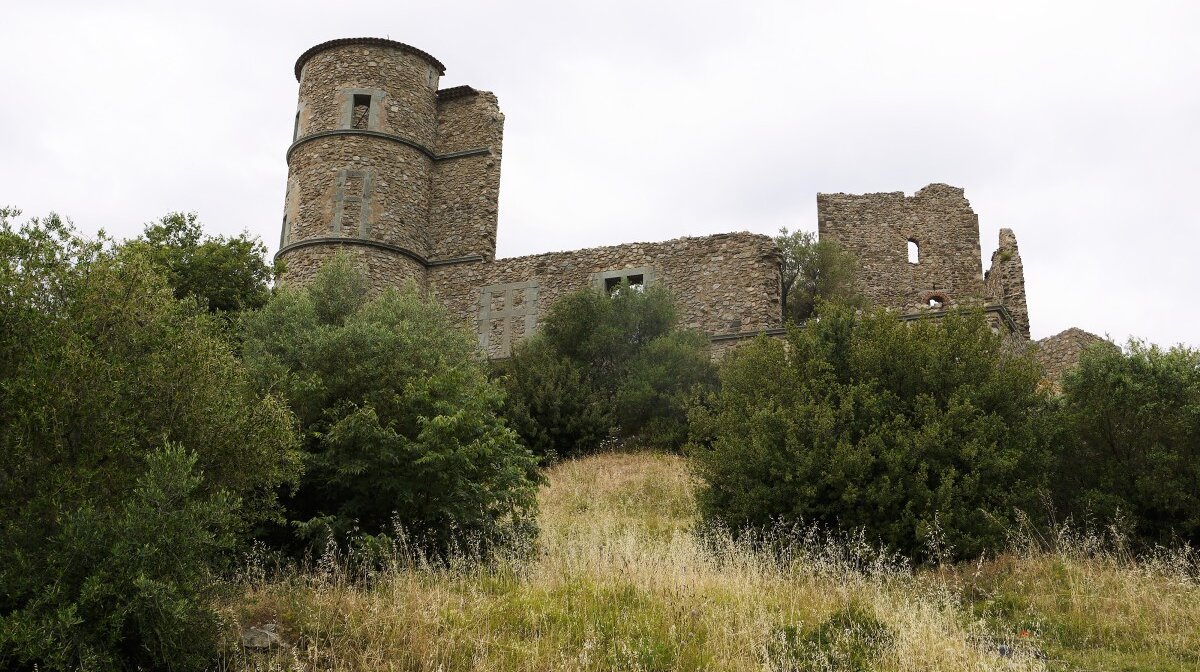 In summer there is no better place to enjoy the lush flowers of the bougainvillea, plumbago or oleander than in the pretty village of Grimaud. Close to the Mediterranean sea on the first hilltop before the Massif des Maures, Grimaud sits there with a cocky attitude that says: we've been here for ages and that's the way it's going to be for centuries to come.

Saint-Tropez may have won the celebrity contest and claimed the name of the Gulf, but Grimaud wins the fame for prettier village. The word "pretty" comes to mind constantly when you walk the cobble-stoned streets and alleys. Meticulously swept and scrubbed each morning by the workers of the commune, they lead you up and down, through archways and around sharp corners to a new alley or surprise you with a fountain on a private square.

In the narrow streets you find many restaurants, boutiques, and galleries that display local artists. Before you allow yourself to be drawn into the local shops or galleries, pay a visit to the Church of St. Michel, a wonder from the 11th Century, Romanesque without a Gothic addition. Spartan, but pure. Sit down in one of the pews and let you imagination go back centuries ago.

The prettiness of Grimaud comes at a price. Or I should say, the price of the village contributes to its prettiness. Grimaud is one of the richest villages of France. In part, because the village houses are bought up by foreigners and restored to perfection. In the surrounding area, villas dot the landscape, most of them owned by outsiders. The tax revenue for secondary homes is substantial. When you see the daily watering of flowers, the scrubbing of the streets, you know that the village budget is ample. But the main revenue for Grimaud comes from its hugely successful satellite village on the water, Port-Grimaud.

Along with a couple of cafe's and restaurants, you'll find a local butcher, baker and fruit & veg shop. In the centre you'll find a boules pitch which you try yourself or watch others from one of the benches that line the square.There are two or three galleries/gift shops, but most of your time here should be spent wandering the little cobbled back streets that hide a wealth of charming, flower-covered houses.

Grimaud is a fine example of the medieval perched village, and is towered over by the ruins of the 11th century Grimaud castle. The Grimaldi family (those of Monaco fame) were the seigneurs of the castle and gave their name to the village. The castle has always been so dominant in the region with its vast view over the sea, that the gulf below was known as the Gulf of Grimaud until the late 19th Century. Now the waters are know as the Gulf of Saint-Tropez.

This village has been extremely well restored, with warm stone and Provencal-painted buildings,vaulted passageways and fountains in pretty squares. It's quite a sleepy place with a traditional feel, and In the centre you'll find a boules pitch where you can have a game or just watch the locals play from one of the benches that line the square. If heading to Port Grimaud, you'll discover a modern town that has been designed to look like an old Provencal town built on canal waterways, with pastel-coloured buildings sitting by the pretty port. Despite only having been designed and built in 1998, the architect has succeeded in making this village look and feel quite authentic- and a really rather pleasant place to be.

Follow the steps up to the ruined 11th century castle, 'Chateau de Grimaud', which was destroyed by Richelieu during the 17th century Wars of Religion. There are commanding views of the countryside and coast from up here. Back in the village the 12th-century Romanesque Saint-Michel is worth a look, as well as the 15th century chapelle des Pénitents Blancs. Just outside the village is an old flour mill with a beautiful restored windmill, or you can head further afield to the ruins of the aqueduct at Pont de Fées.You can also take a walking tour of the village- pick up a pamphlet at the Tourist Office.

With craft fairs and village fetes you will not be short of things to keep you entertained in Grimaud or around the Port area. Make sure you check our events calendar so that you don't miss out.

Things to Do in Grimaud

Situated on the edge of the Massif des Maures, Grimaud is in a fantastic spot for outdoor pursuits. The Maures have many hiking and mountain-biking trails which pass by Grimaud, including the long-range hiking trail GR51. From Grimaud villlage you can also take a short hike to the beautiful ruins of the old aqueduct at Pont de Fees. On summer nights, one of the best activities of the area is to head up to the ruins of the castle, where one section has been transformed into an outdoor theatre with a program of events- including a world music festival 'Les Grimaldines' in July. Down on the coast, Port Grimaud is near the end of the GR9 hiking trail- or you can take a diving excursion to explore the coast underwater. Why not rent a boat for the day and head out on the Golfe de Saint Tropez, stopping at sandy beaches and quiet coves along the way?

As Grimaud is a slightly less expensive alternative to its neighbour St Tropez, it is a popular place to be based. There are a couple of very nice local boutique hotels in or near the village, plus a good selection of B&B's. Further accommodation options can be found Saint Tropez itself.

Port Grimaud, 5km away on the coast, is a modern town designed in the old Provencal style, with a bustling superyacht marina. To get to the old village by public transport, you can take the train to Saint-Raphael, then hop on the bus to Grimaud St-Pons where you can then change for the line 7702 to Grimaud. Alternatively, in the summer a little tourist train (complete with commentary) runs from Port Grimaud up to the village.)