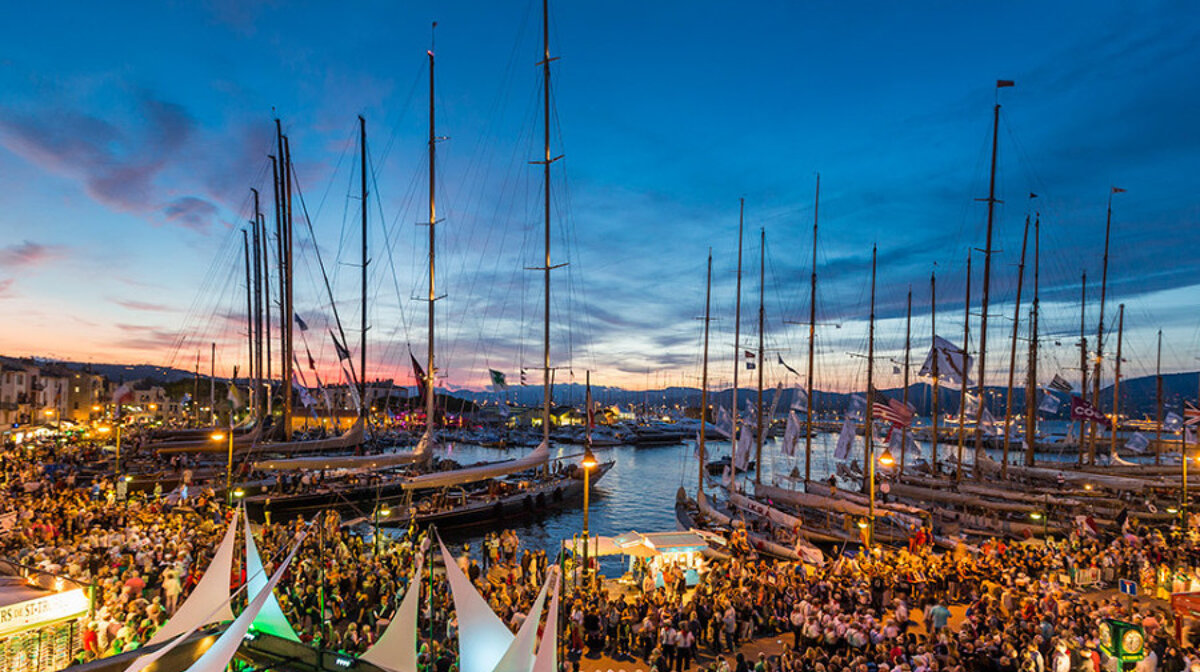 This regatta is a magnificent sight, with yachts up to 100 years old tacking and jibbing across the bay in the first winds of autumn. It’s an action-packed race as yachts bear down on each other with only metres to spare, sails snapping and billowing and crew racing about on deck. The regatta has had terrible accidents in its past but lives on as one of the sailing world’s favourite events. In the evenings, the yachts return to the colourful fishing port of Saint Tropez and the sailors and yacht owners paint the town red. One of the truly great events of the Riviera.

During the first week the event welcomes classic and modern boats (up to a size limit) and the second week there will be large modern sailboats and even some maxi yachts.

There can be up to 300 yachts competing in the first week and nearly 50 modern maxi yachts in the second week, making this an exhilarating event to watch or compete in. A host of racers and sailing enthusiasts come from all corners of the globe to do battle in the bay of Saint-Tropez. The Rolex Trophy is awarded to the winner of the Classic Division (over 16 metres).

This event really showcases the most exceptional boats designed by the world's greatest naval architects, and is the largest gathering of maxi yachts in the world. It's a fantastic opportunity to get up close to these high quality, rare boats, as they battle it out on the water in the face of the strong Mistral that blows down the Gulf of Saint Tropez at this time of year.

The festivities on land are mostly free and include a 'salon' area with musical entertainment, exhibition stalls and all things sailing. Most of the events will take place in the streets of the old part of St Tropez, in the narrow cobbled lanes that lead from the Port to the foot of the Citadel. Some of the reception events are invite-only but if you check out the programme in advance you can see there will be several public events as well.

One thing's for sure St Tropez is not short of cafés and restaurants to enjoy whilst you're in town, and make sure you take the time to sit at a port-side table to enjoy an ice cold glass of local rosé wine whilst you ogle the yachts of the rich and famous.

Originating from a chance meeting in 1981, when an 'off the cuff' challenge of a 'regatta' between the skippers of two boats - Pride, a Swan 44, and Ikra, a 12 metre JI - was run in the Golf of St Tropez. Starting in front of the Portalet tower, the boats ran around the buoy on the shoal of the Nioulargue to finish in front of Club 55, a restaurant in Pampelonne, for lunch paid for by the loser. The owner of the restaurant named the event the Club 55 Cup. The following year the losing skipper insisted on a rerun to exact his revenge, and other boats wanted to get in on the action, and so began 'The Nioularge' - the new Saint Tropez regatta. The following year maxis were invited to join, and after some shmoozing and boozing it was registered on the official maxi class calendar.

From 1984 they had introduced categories such as "sea explorers", "tropéziens-travail", and "tropéziens-marconi" to constitute classes, and at the entrance to the port there were parades, costumes, dancing girls (the famous 'girelles'), boules and water games. The Nioulargue gained international recognition, and gradually became an unmissable end-of-season event on the Mediterranean regatta circuit.

The 1995 regatta sadly ended in a collision during the race, when one boat sank and a team member died. The event was suspended until the completion of the trial, where the two owner-skippers were eventually held liable and fined for not having respected certain basic rules of navigation.

The regattas began again in 1999 under a new name: Les Voiles de Saint-Tropez. Gone were the parades, dancing girls and water games, as the times and regulations had moved on.

The 'Club 55 Cup' became a part of the regatta again from 2003, and is now a race where two sailboats compete on the historic course.

There is no need to buy tickets for the Voiles de Saint Tropez, most of the action will take place on the water so all you need is a good spot to watch from and a pair of binoculars.

If you can tear yourself away from the sailing at then there are plenty of other things to see and do in Saint Tropez. Don't forget to check out our Events Calendar to see what else is on in Saint Tropez during your visit.